Takashi Nemoto’s exhibition “Ocean of Trees” last year at Mizumi Art Gallery. Takashi Nemoto, famous for his exceptional/unorthodox manga art, spent half a year painting the exhibited large-scale work titled “Ocean of Trees”. The finished work was about the same size as Picasso’s famous Guernica (1937) – 333.3 x 788cm. The work has drawn a lot of attention.
The project – which had by then become known as the “Nemoto Guernica Project” – could be/was realized through the cooperation/support of manga creators, contemporary artists like Makoto Aida and – through the help of crowdfunding websites – members of the public. Using fixed cameras, photographer Yasuyuki Emori has documented the creation of the pictoral work as it progressed in a corner of an ironworks in Tokyo’s Keihinjima district/area.
To document the “Guernica Project”, Yasuyuki Emori chose to photograph using SIGMA cameras and lenses. We have asked the artists about his reasons for this choice and about his thoughts after the project/ shooting.

― I heard this is not the first time you’ve used SIGMA’s products.

Yasuyuki Emori: The first SIGMA equipment I’ve used was the DP2x camera. A friend recommended it to me, and so I bought it on launch day in 2011. The lenses were SIGMA’s 35mm F1.4 DG HSM Art and the 50mm F1.4 DG HSM Art. I bought both of those, too, on their release day.

― Did you enjoy using them?

Yasuyuki Emori: The DP2x shoots at ISO 50 or 100 without upping the sensitivity and prioritizes a good exposure. When these conditions are met I understood the 2 great power to shoot brilliant images that the camera provides. So yes, it’s quite interesting to shoot with it. The Foveon sensor takes photos that remind me of film photography. I liked it right from the start.

― Which gear did you use for this project?

Yasuyuki Emori: For the fixed perspective shots, I used the sd Quattro H together with the SIGMA 12-24 F DG HSM Art lens.

― Why this particular camera-lens combination?

Yasuyuki Emori: The sd Quattro H’s high pixel count – equivalent to 51 megapixels – and the distinct look of the Art series lens were the main reason. There’s a vividness and richness to the colours which I thought ideal for Takashi Nemoto’s artwork. Also, when the project began, it was not clear where exactly I would be able to install my fixed camera. So I decided on a zoom lens that provided the necessary flexibility.

― Takashi Nemoto’s image is such a large-scale work, and every last corner of it he painted it in enormous detail. I think documenting the painting process with the help of fixed cameras is quite a unique experiment.

Yasuyuki Emori: I have had the luck to work with Nemoto before and was very happy when he asked me to participate in this project. I had complete freedom regarding the shooting approach, and since Nemoto didn’t know much about cameras at all (laughs), I installed the camera at a fixed spot and had him release the shutter several times a day while he was painting. He took about 5 to 6 shots with the fixed camera per day, 861 photographs in total.

Yasuyuki Emori: Yes – Nemoto compared the images to an animation. It’s interesting to see the photographs in succession. It feels like you’re watching over the artwork while it’s growing up before your eyes. In addition to the fixed perspective shots, I visited the gallery at different milestones and photographed the artwork as if I was taking someone’s portrait. So, the number of images is quite high, yes.

― But wasn’t it difficult to capture all the fine details in the photographs?

Yasuyuki Emori: At the very end, Nemoto used fine-tip pens to finish his work, so yes, the details were very fine and minute. But the sd Quattro H with its 51 megapixels captured these details and allowed me to create a precise documentation. I think it was the right choice.

― Finally, if there’s anything you’d like to expect from SIGMA in the future, now’s the time to let us know.

Yasuyuki Emori: A photography project like this doesn’t come along all that often (laughs) but I focus on portrait photography and expect the Art series lenses to be a valuable addition. I’ve really grown fond of them. Their image resolution is a perfect fit for my photography. One word that comes to mind when I think of SIGMA is “advance”. I’m excited to see what you’ll announce next.

The “Guernica Project” began after I met with an editor I hadn’t seen in ten years. His first words were, “Nemoto, won’t you give painting a shot?” That’s how the project started. If I blew up a frame of my manga comics to a large size, that’d be a piece of fine art – that kind of thing. I was actually considering painting as a next step in my career, so it was very good timing.

My meeting with Yasuyuki Emori, too, had an element of fate to it, and I was able to ask him to participate as a photographer. I know nothing about photography techniques, so when he told me about fixed camera photography, I honestly didn’t know what it meant. He set it up and told me where to press to take a photograph, and so/after that I began my work. Each time I painted a little, I got off my stepladder, went to the camera and released the shutter. At the beginning it may have been a bit annoying, but when you look at it afterwards, you can see the painting progress in the span of a few minutes, like some sort of animation. It’s really interesting to watch.

I also had a look at close-ups of the photographs, and you can clearly see all the details. I also used the photos to create goals for myself. “Oh, so if this was yesterday’s progress, then today I’ll try to get to this point.” The general approach for this piece wasn’t to think it through in my head but to paint it while I actually moved around. The camera was a great help with that. 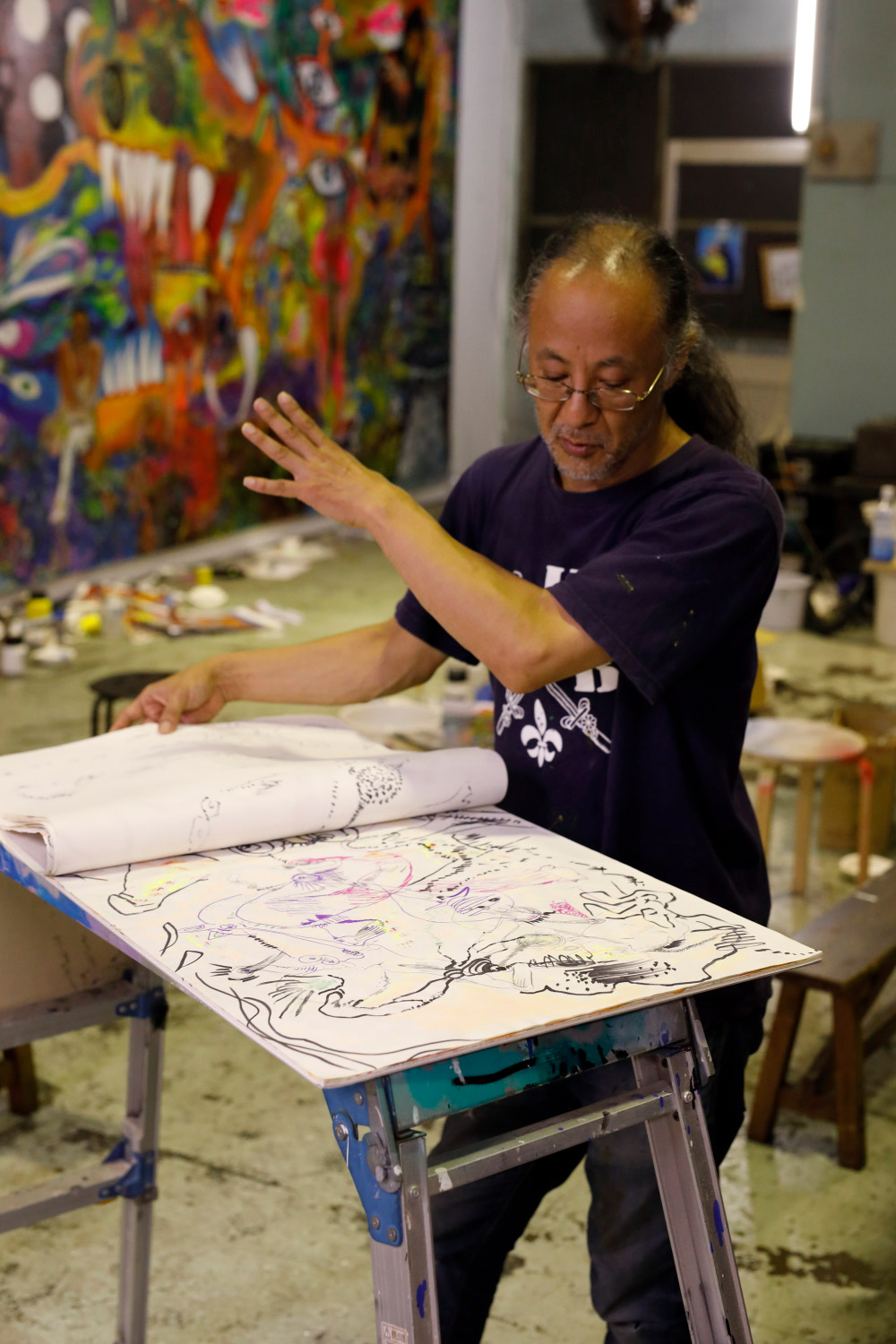 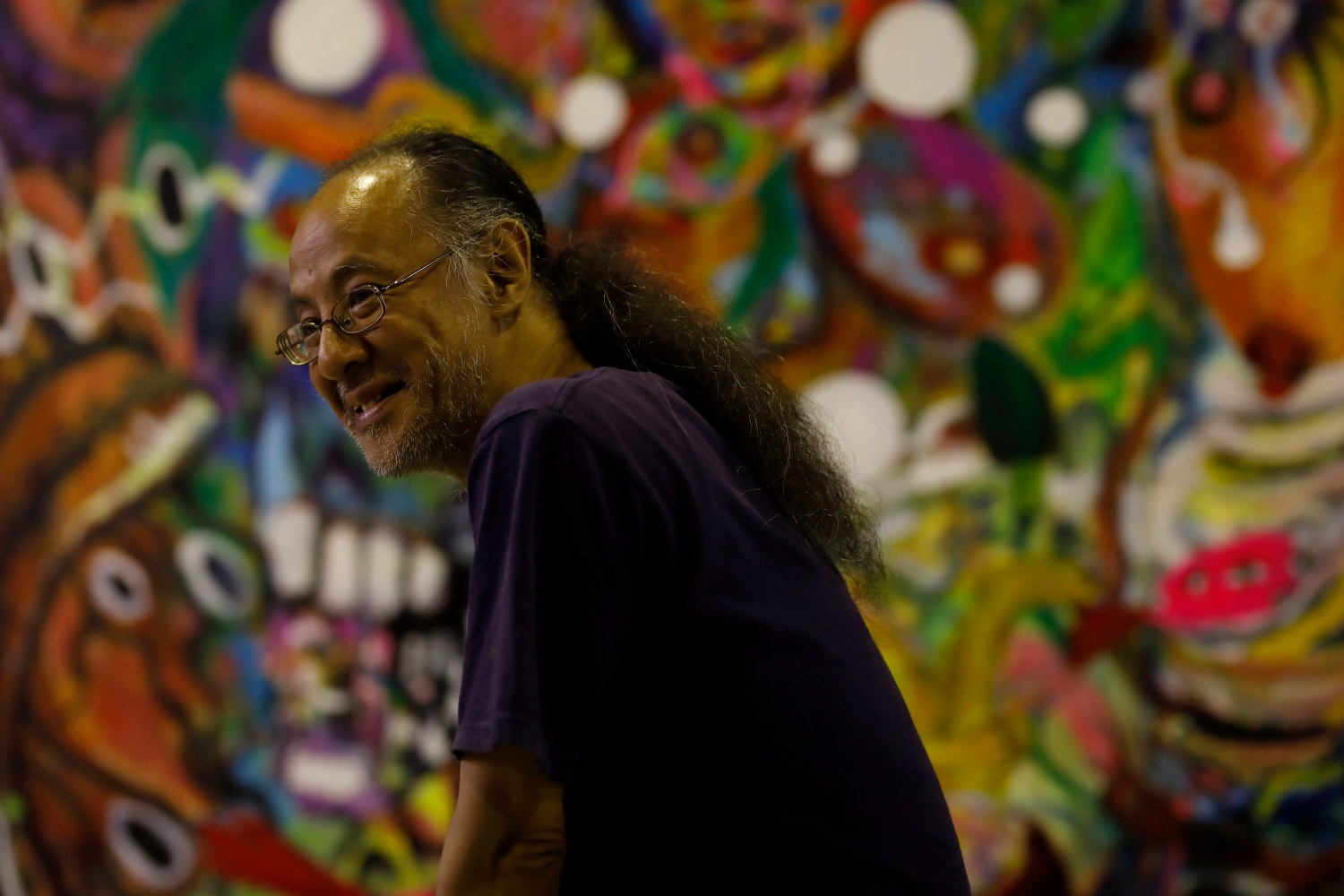 Born in 1979. Debuted in 2002 with the photobook “The 48 Waterfalls of Akame” (published by Little More) and has since specialised in portrait photography.